During my vist to China this year, after finishing my research in Shuiji, I went to Jingdezhen to catch up with some friends and to do some futher research into porcelain. My host, Danyuan Liu, from the Fragrant Garden Studios in the Old Sculpture Factory, offered to take me to one of the last of the Old Pottery Factories still operating within Jingdezhen. To say it was facinating is an understatement, and I learnt so much from the experience.

Firstly I had always puzzled at how the “Rice Burn” technique had been accomplished and even though they no longer have throwers in the factory, they use the rolling head jigger jolley machines with plaster moulds, I was finally able to solve the problem. No, they didn’t place individual rice grains in the clay and burn them out! For a start they do no bisque the work here, it is all raw glazed and once fired. As you will see in the video, they have a very ingenious machine that cuts the holes, in this case  three sets, but it can cut six sets as well. The holes are filled with glaze, that is the pink in the sauce bottle being sqeezed into the pots.

I was impresssed with the high level of skill demonstrated by all the workers in the factory, of special note are the glazers, one using a basket ball and foot pressure to glaze the insides and the other using a suction cup with an ingenious little rubber band to break the seal. All so efficient.

I hope you enjoy the video. 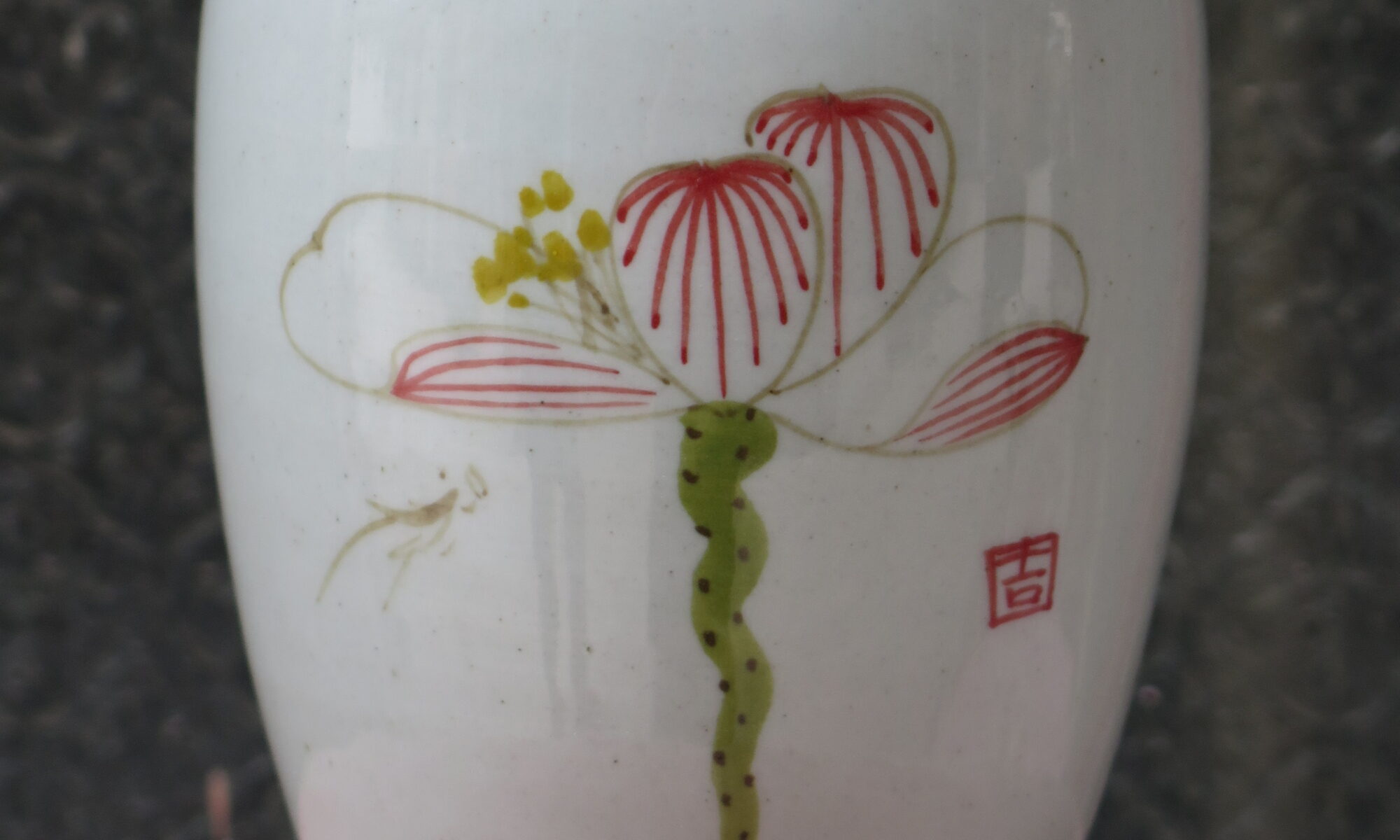 In my third visit to Jingdezhen in China, my main focus was to make pots and to explore the very special pottery traditions, materials and tools that have developed over the centuries in this centre of world porcelain production.

We were honored to be welcomed into a friend’s workshop to watch specialist craftspersons throw, turn amd decorate pots. In Jingdezhen they specialise, unlike those of us in the west who have to be complete craftspersons. There are throwers, turners, decorators, glazers and kilners. All of these skilled workers are well paid by Chinese standards.

Because the Porcelain stone used needs to be turned when it is almost bone dry, otherwise it shreds, there is a lot of dust generated in the turning process. We had a lot of concern for the lungs of those in the workshop during the turning process. Similarly spray glazing generates a lot of dangerous dusts and some of the practices used wouldn’t meet any of our OH&S standards.  We were assured that these practitioners make enough income that in a few years they can start their own business and work in a healthier environment. We certainly hopes so.

Here is a short film of the making process:

During a visit to Jingdezhen in May this year, Steve Harrison and I took time off from making pots with hard paste porcelain clay to visit this workshop. The truth is we were waiting for our pots to dry so we could turn them.

As you will see, the pot sections were already thrown, something we will have to see next time we visit, and they are almost dry.

In this video they  the potters are turning the sections first to prepare them for joining. It is astonishing how dry they are and how thick and we never saw one of these with the joins cracking here in this workshop or over at the workshop where they were decorated glazed and fired.

It was the Plumer’s book that intrigued me most. Online searches indicated there were only two copies of Plumer’s book in libraries in Australia and one of those was at the University of Sydney. Discovering that fact, I immediately called the University organising for the copy they held to be brought out of storage. With nervous anticipation, as I had no idea of it’s contents, only its title, I rode my bicycle to the Fisher Library.

When I opened “Tenmoku” I felt an immediate rush of excitement, there in front of me was the tale of a journey by an American adventurer, later professor of Asian Art, James Marshal Plumer, into the wilds of China to discover the source of the Jian Ware, work he had collected in the 1920s whilst working for Chinese Customs. I spent an hour in rapturous reading, getting more and more excited and I decided that I would trace his steps and discover for myself what it was that gave Jian Ware its uniqueness? I scanned the book and I left elated, my El Dorado on a USB stick, in my pocket.

By  searching online I found a second hand copy of “Tenmoku” in Switzerland and had it mailed to me. This book and its author’s journey has become a major focus for me, James Marshal Plumer; the person who discovered the site where Tenmoku was born.

After reading his book I began to plan a trip my  to China to the site of his initial 1935 excavation, to explore it for myself. Part of my thesis is that as a potter, I bring a maker’s eye to this research, a new vision that could add to the knowledge of Jian Ware, by finding the materials the Jian potters used to make it; their clay, glaze and kilns. New ground, the gap, a fertile field for research.

In November 2014 I travelled to China and followed some of Plumer’s journey; his was an arduous 2 weeks, interrupted by bandits, flooded waterways and obstinate officials; mine was a less arduous 10 hour trip by train. I was able to do excavations for shards, collect mineral samples for analysis, visit local collectors and see current pottery workshops and kilns. A wonderfully successful trip but I was now left with more questions and I knew I would have to return.

Back in Australia I began to prepare for a trip to the US to explore some of the questions raised in China. Using the Mowrey”s book as a guide I contacted the University of Michigan Museum of Art, Harvard Museum of Art, The Boston Museum of Fine Art, the Metropolitain Museum of Art in NYC and the Museum of Asian Art in San Francisco. This was a complex set of negotiations and communications stretching my organisational skills.

With a good list of museum visits organised and ANU funding I booked my trip.

Just before I left I received an email from the curators at the UMMOA asking whether I thought to contact their Archeology Department, as they thought Plumer’s shard collection may have been there. This was one of those magic leads that cropped up again and again during my trip and, confirming that this was indeed the case, I immediately rearranged my schedule to fit in a day in that Museum. Earlier I had been searching the archives of the University of Michigan’s  Bentley History Museum hoping I would find some of Plumer’s papers and through the wonders of internet searches discovered that they had two such boxes, so I again made arrangements to get access and spend a day in those archives.

Arriving at the Bentley I was presented with two boxes. You can guess how excited I felt when I opened those boxes. They were a treasure trove of writings, photos and much, much, more. When I opened the first box, at the front were 10 bound volumes, from 1920 to 1929, of Plumer’s letters to his mother in the US. As a cultural history of expatriate life in Eastern China in the 1920s they are priceless. The little I read of them suggested they alone were worthy of a History PhD, or maybe, a book for me at a later time. Behind these were album after album of photos of social events, people and travel in and around China in the 1920s. Fascinating, a return visit beckons.

It was when I opened the second box that my pulse began to race, the first bundle I pulled out was the original manuscript for Plumer’s book with all his photos, drawings and maps.  The manuscript was annotated with many handwritten notes and corrections for the publisher.

I dug a little deeper and hidden between two photo albums was a small Chinese School exercise  book and as I opened it I shuddered with the realisation that I had in my hand the original notes Plumer wrote as he travelled down to Shuiji from Shanghai in June of 1935. I skimmed through them barely able to hold the pages still until I came to the top of the page for June 27th were Plumer had inscribed the words El Dorado!

Further down the page was a description of the walk  out from Shuiji to the valley a few kilometres away where the kilns and the shard heaps were sited. The very journey I had completed in November.

One of the two Plummer Archive boxes

Plumer’s original diary of his 1935 trip

One of Plumer’s original shards collected the site on that day. 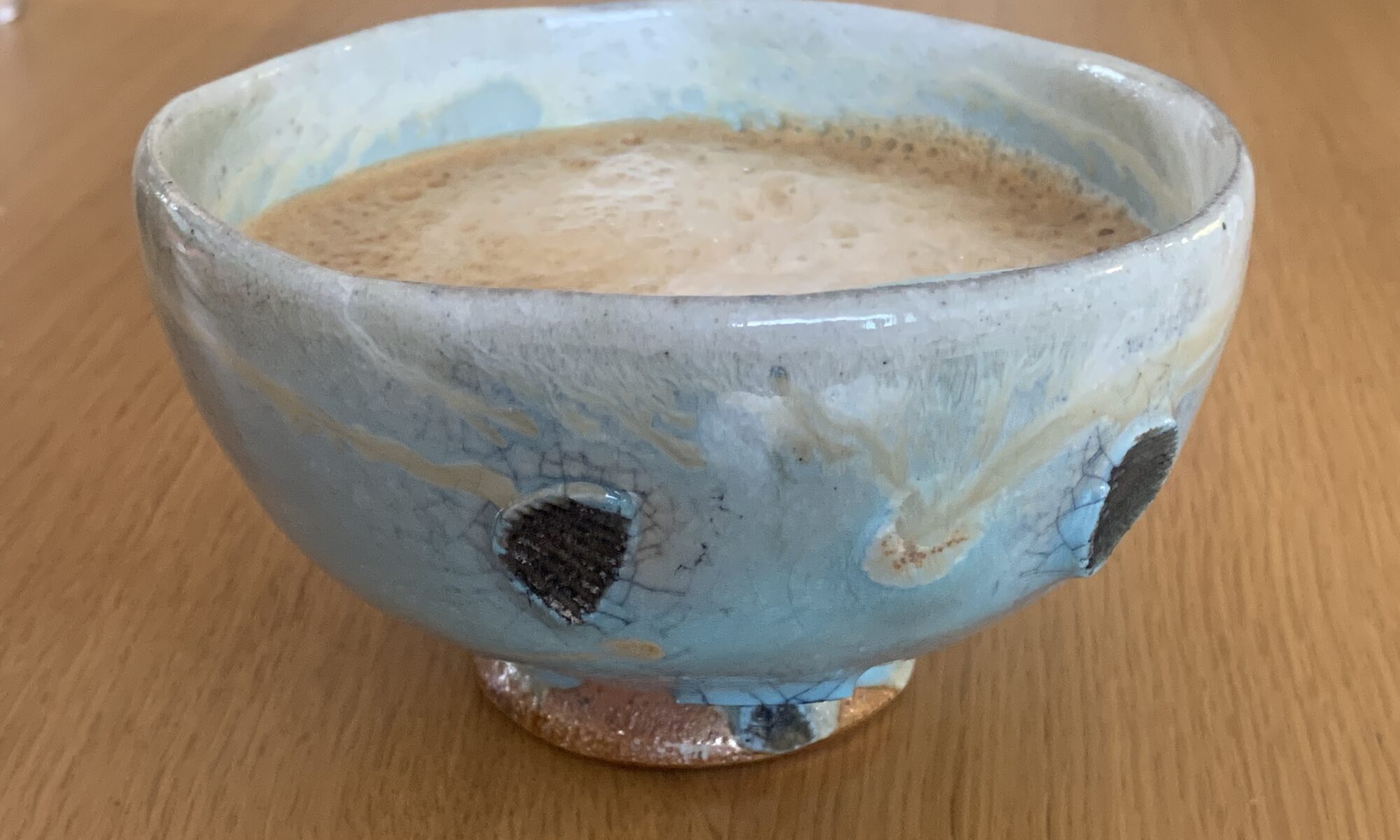 The Rosedale Street Gallery and Studios

The Gallery and Studios of Lindy Rose and Leonard Smith

Lindy Rose Smith is a textile artist who was previously a potter.

Leonard Smith is a potter with an consuming interest in a sustainable practice.